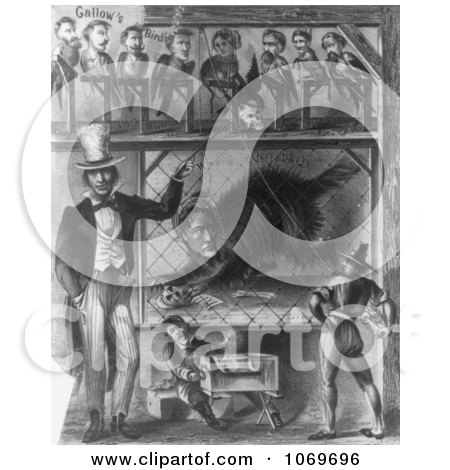 Royalty free black and white Historic stock illustration issued in the wake of Lincoln' assassination in April 1865, the print conveys some of the Northern hostility toward the conspirators, whom the public associated with former president of the Confederacy Jefferson Davis. Uncle Sam or Brother Jonathan stands before a cage in which a hyena with the bonneted head of Jefferson Davis claws at a skull. Davis' neck is in a noose, which will begin to tighten as a man at right turns the crank of a gallows. The bonnet on Davis' head alludes to the circumstances of his recent capture. Below, a man grinds out the song "Yankee Doodle" on a hand organ. Above, the Lincoln conspirators are portrayed as "Gallow' Bird'," with their heads in nooses. From left to right they are: Michael O'Laughlin, David Herold, George Atzerodt, Lewis Paine, Mary Elizabeth Surratt, Samuel Arnold, Edman Spangler, and Dr. Samuel Mudd. Uncle Sam points his stick at a skull "Booth," on which sits a black crow. Booth had committed suicide on April 26, 1865.