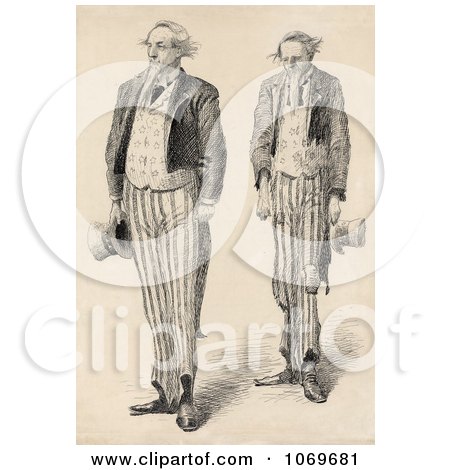 Royalty free sepia toned Historical stock illustration of two Uncle Sams, one Uncle Sam as a well-dressed stalwart figure wearing striped pants and a waistcoat covered with stars, carrying a tall hat at his side. The Uncle Sam in the background is emaciated, shabby, and dejected. "Lest we forget" is the refrain in Rudyard Kipling's poem, Recessional, published in 1897 at the height of the British empire. In the poem, Kipling warns against the perils of pride and the impermanence of power. The United States emerged from the Spanish American war in 1899 as a quasi-imperial power. The cartoonist may be cautioning the nation to remember its humble beginnings, 1893.